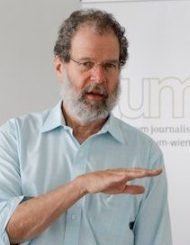 Peter Laufer, University of Oregon, is an award-winning author, broadcaster, documentarian and journalist. He has studied and taught throughout the world — Europe, the Americas, Africa and Asia. He sent home reports on the Soviet invasion of Afghanistan and the wars in Central America for NBC Radio, reported for CBS Radio as the Berlin Wall fell, and chased butterflies in Nicaragua for his book The Dangerous World of Butterflies.